Break Through Gym Plateaus With This 60-Second Workout

Every weightlifter, bodybuilder and fitness athlete has or will encounter the dreaded plateau at some point in their gym training. You’re still showing up regularly, still putting in 110% effort every workout, but progress has STOPPED… So let’s take a look at why it happens, then look at a workout you’ll want to try to get past this roadblock.

The human body is one of the most complicated, efficient organisms in existence. Your body is constantly evolving and refining itself for maximum efficiency and results. It uses fat for energy when it’s not getting the right nutrients at the right time in the right quantities, so it tries to store as much fat as it thinks you may need down the road – all based on what you give it and how much energy you expend daily. (Remember, a calorie is a measure of ENERGY, not weight or mass.) 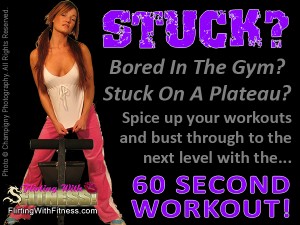 On the other side of the equation, it knows that muscle consumes more energy than any other element in your body, so it tries to limit the amount of muscle on your body to just exactly enough to get you through the day and no more. This is why the muscles you’ve built in the gym start to erode as soon as you stop weightlifting, even though fat seems to hang on forever.

So when your weightlifting stalls and you hit that plateau it’s almost always because your body believes you’ve got enough muscle already – or at least enough to handle the stresses you place it under each day. Perhaps you’ve been using the same routine for too long, or going between routines that are too similar. Or maybe you haven’t been increasing the amount of weight you’re moving during each workout enough – insufficient increases in total workload placed on the body.

But it can also be a lot more complicated. If you’ve been lifting weights for years it’s going to take that much more to keep adding muscle to your body when it’s already carrying more muscle than your frame was designed for. Take a compound lift like squats or deadlifts. There are a dozen or more muscles involved in each rep, ligaments and tendons at every joint that have to participate, plus the bone strength and bone density need to be up to the task of supporting all those forces without breaking. Oh yes – and don’t forget the electrical impulses that must run unimpeded between each muscle cell and your central nervous system. Or the hormones your body releases when under stress – try working out with no adrenaline, testosterone or endorphins in your system and see how far you get. And your endurance during workouts is also dependent on stored oxygen – both in the lungs and in every muscle…

A very complex system indeed! And the bad news for weightlifters, bodybuilders and fitness athletes is that your performance is limited by the weakest link in that whole process! Try to push too far past that weak link’s limit and you’ll learn the displeasure of muscle pulls, muscle tears, hernias, rhabdomyolysis, etc. So it’s not as simple as ‘work out longer’ or ‘use heavier weights’ – often a plateau is reached because you can’t do either right now. So now what?

Don’t get all excited here – 60 seconds isn’t the total workout time on this system but rather the length of each set. You already know that everything you’ve tried so far isn’t getting you out of the rut your workouts are in, so give this a try for the next 3 – 4 weeks. Pick ONE exercise per bodypart and do a full-body workout 3 times a week on non-consecutive days – Monday, Wednesday & Friday, for example.

For each exercise you want to do 3 60-second sets with a 30 – 40 second break in between. If you’re training with a partner, do your 3 sets then have them do theirs – don’t use the usual back & forth sets as the break between your sets would have to be at least the 60 seconds for them to do their set, and you want to keep your breaks under 40 seconds.

Here’s where this system is counter-intuitive – don’t bother to count reps and don’t worry about tempo (as long as you’re not breaking form or using momentum to help out). Just pick up the weights and rep out for 60 seconds, rest for 30, rep out for 60, etc. The weight should be light enough you have no trouble getting in the first 60 second set but heavy enough you have to fight to get those last 5 reps in on the 3rd set. You’ll know you’re doing it right if your muscles are bulging and the pump is creating a really nice burn deep in the muscle you’re working.

Even for most gym rats, 60 seconds is longer than your normal set. You’ll probably be doing between 20 and 40 reps per set, which is a higher rep scheme than you’re probably used to. Each muscle group will have to increase its endurance, yet your overall system gets a bit of a recuperative rest because the entire workout is over in 35 – 40 minutes (up to an hour if you’re training with a partner). But if it seems like this would be too easy a workout then try it for a week and get back to me on how easy it was for you… 😉

How does this help you smash through the plateaus? First, it fills the muscles with far more blood than they’re used to holding. Since blood is the transport for both the oxygen, nutrients and hormones feeding the muscles and the waste materials like lactic acid coming out of the muscles, you’re creating a nice ‘spa bath’ environment to give the muscles optimal conditions for health and recovery.

And since the weights will, of necessity, be lighter than you would otherwise be using this cycle will give your ligaments and tendons a bit of a breather, helping them recover fully while still being stretched and moved regularly. The lighter load will also give your nervous system an increased chance of fully recovering from the months or years of hell you’ve put it through.

Two ‘safeguards’ are built into this system to minimize the possibility of losing muscle mass during the cycle as well – first, you’ll only be doing this for 3 – 4 weeks and second, you’re working the full body 3 times per week. Assuming you eat clean with plenty of protein and get sufficient rest each night, by the end of the cycle your body should be back in optimal condition, have reached homeostasis, and be ready for an energetic return to building muscle mass for you.

Oh – and I haven’t overlooked your mind-muscle connection either… At the end of each bodypart, or at least the end of each workout, spend a couple of minutes posing in the mirrors. It’ll do both your self-confidence and your subconscious good to see you looking so pumped and muscular!

Bodybuilding: The Importance Of Your Post-Workout Shake