Back in 1994 when I first published Canadian Blader magazine there were relatively few inline skaters in North America, and almost all of those used them just for recreational skating, not specifically for exercise. Roller hockey was starting to catch on, more adventurous skaters were taking to the half-pipes to see how much airtime they could achieve, and one of our columnists was teaching people how to figure skate on inlines. Friends and I had started blading the path along Toronto’s waterfront and back twice each Saturday & Sunday, with recreational skating along the Beach path in between, covering 60-80 miles a day on our skates. 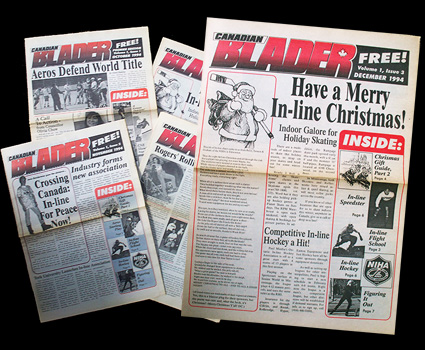 And while this was great conditioning exercise for us all, we didn’t think of it in terms of working out, but as fun with friends in the great outdoors. It was a number of years later, when HIIT training began showing up in the exercise and medical journals that I realized how effective one style of our activity really was for us.

Looking back on it I should have seen the exercise value much earlier… While we could easily traverse the 27-mile round trip of the Toronto path, we’d be out of breath after just a few blocks of speed skating when we started to race each other along the way – we just had no idea we were already HIIT training back then!

When it comes to cardiovascular exercise or exercise to help lose weight, High-Intensity Interval Training (HIIT) has been shown over and over again to be the most effective style of training. And done right, inline skating can be one of the most powerful HIIT training tools at your disposal.

High-intensity interval training consists of short bursts of all-out effort followed by a longer period of exercise at a more moderate pace. The standard timing most commonly recommended is 30 seconds of all-out effort followed by 90 seconds of more moderate energy expenditure while you get your breath back and your heart rate back down some. This pattern is repeated over and over for a total of 15 – 30 minutes and delivers far more benefit to your body and weight-loss effort than much longer bouts of constant-pace aerobic exercises like jogging. 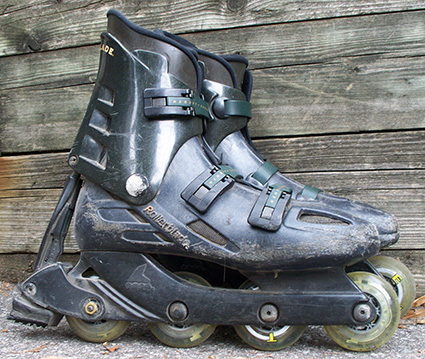 If you’ve been doing cardio or even HIIT training on a treadmill at home or in the gym, it’s time to consider moving outside and slapping on a pair of inline skates. To start with, running on an electric treadmill simply entails lifting your feet and putting them back down as the tread moves by. On inline skates, you need to push out and back with each stride since you’re providing the push to go forward, not an electric motor.

Similar to cross-country skiing in this regard, pushing out and back against the road’s resistance activates the muscles of the entire posterior chain with each stride. The day after your first 2-3 hour inline skating session will remind you of this, as you’ll be well aware of how effectively you used your hamstrings, glutes and lower back muscles!

Another factor is the weight of your inline skates. Your legs are used to lifting your shoes over and over each day, including when you’re jogging or sprinting. In most cases, however, your leg muscles aren’t used to lifting footwear that weighs as much as your skates will. Not a big deal, but every little bit helps when you’re after conditioning or burning fat, right?

So how do you convert pleasurable time on your skates to HIIT training? The first method is the same as standard HIIT training – hill sprints. Find a paved path or street with a hill just steep enough it takes about 30-seconds to climb at full-out effort levels. Skate full-force up it, then slow to a comfortable pace and go a bit further, then reverse your direction and skate leisurely back to the bottom of the hill before sprinting back up again.

The second way can be more interesting, though, and can be practiced anywhere you go on your inlines – a path, a track, wherever. After a comfortable warmup session, adopt the stance of a speedskater on ice. Bend forward until your upper torso is parallel to the ground and place one hand on your lower back, palm up. Let your free arm hang down and swing it back and forth laterally in front of you in time to your strides for balance.

This maneuver should only be used by experienced inline skaters wearing their helmet and full pads, as you’ll most likely find yourself going much faster than you’re used to. As you become more used to the proper form for speedskating you’ll be able to lean a little further forward, necessitating faster, longer strides and moving you forward even faster. Even very experienced skaters will be surprised at the oxygen requirements when skating this way, and you’ll find you’re hitting oxygen-depletion very quickly. Straighten back up and skate comfortably for a minute or two until your heart and breathing slow back down, then hit another 30-second sprint.

One caveat… Like any extreme exercise session, HIIT training should only be attempted by those already somewhat in shape. If you’re just starting your path to a fitness lifestyle, stick to recreational inline skating until you’re well practiced on your skates and have achieved a better level of fitness. New activities that deplete your oxygen reserves can be dangerous, even deadly, until you know how to gauge what you can and can’t manage in your current condition. As with all forms of exercise, start light and build from there!